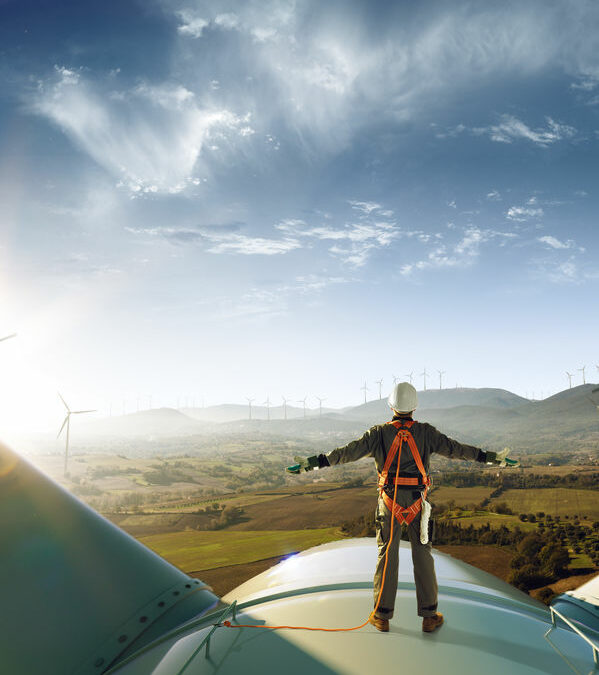 (To increase the size of the text in the images, hit Ctrl and + as many times as you need, then to get it back to normal size hit Ctrl and -.)

These numbers match up with the 2018 U.S. Energy and Employment Report 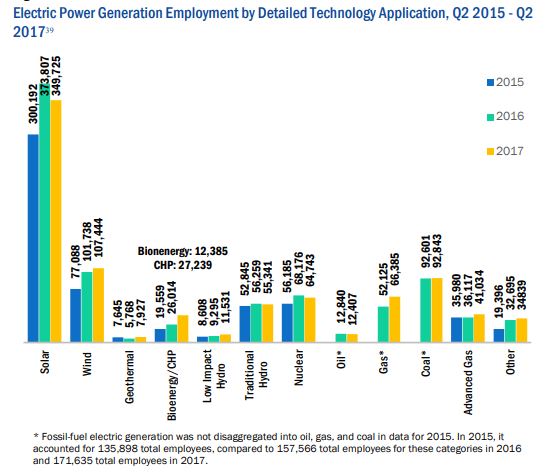 A 2017 Department of Energy employment report showed that 32% of wind and solar jobs were held by women.

In Illinois in 2018 there were 123,247 clean energy jobs according to Clean Jobs Midwest: 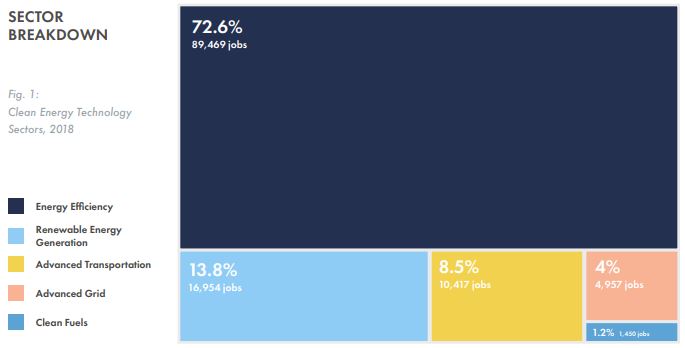 Keep in mind, this is just for the job categories listed above (“clean energy”), not including anything outside of energy-focused. So nothing about agriculture, water, waste reduction, resilience, or any of the other multitude of Climate Economy Categories (listed to the right or below this post).

Despite this progress, emissions are still rising. According to a study in Nature:

At a time when countries have pledged to curb greenhouse gases sharply, the data show that annual emissions spiked by 2.1% in 2018 — owing in part to increased demand for coal in places such as China and India.

There are many complicated issues wrapped up in this, but the outlook is still that China will reach peak emissions by 2030, according to the article. The thing about clean energy is that the overall footprint is lower, including the energy required to produce solar panels, for instance. According to a life cycle study in Carbon Brief:

A crucial strength of our approach is that it fully accounts for future changes in the energy system. For example, increasingly less energy will be required to produce solar modules, due to technological progress and a shift towards less energy-intensive technology variants. At the same time, the global climate change mitigation effort will reduce the CO2 emissions per unit of electricity and steel inputs, further limiting life-cycle greenhouse gas emissions. The earlier studies considered by the IPCC did not account for these future changes, thus overestimating indirect energy requirements and indirect greenhouse gas emissions of several low-carbon technologies.

So over time, even as more and more people get access to clean energy, emissions are going down.

Well how does the future look?

According to Dr. Mark Z. Jacobson, energy expert and scholar, has produced a plethora of research regarding the potential of renewable energy for the world. For the 50 U.S. states, his studies show a bright outlook for water, wind and solar energy (WWS). By 2050, about 2 million more jobs have been created in the U.S. in clean energy than have been lost in energy:

This is only for construction and operation of clean energy installations, not including energy efficiency or anything else. And let’s talk about the increases in quality of air and increases in savings:

And avoided deaths from fossil fuel pollution has also been calculated

For a detailed explanation of how these number were calculated, please visit the link above for the 50 states.

Last but not least, according to IRENA’s Roadmap to 2050, globally:

With holistic policies, the transition can greatly boost overall employment in the energy sector. On balance, the shift to renewables would create more jobs in the energy sector than are lost in the fossil fuel industry. The REmap Case would result in the loss of 7.4 million jobs in fossil fuels by 2050, but 19.0 million new jobs would be created in renewable energy, energy efficiency, and grid enhancement and energy flexibility, for a net gain of 11.6 million jobs. 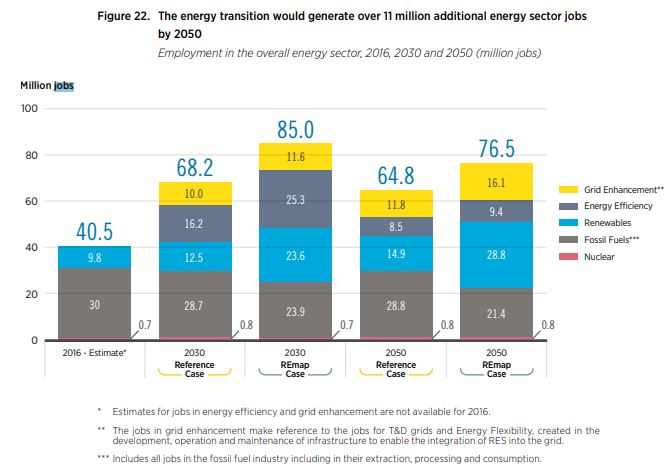 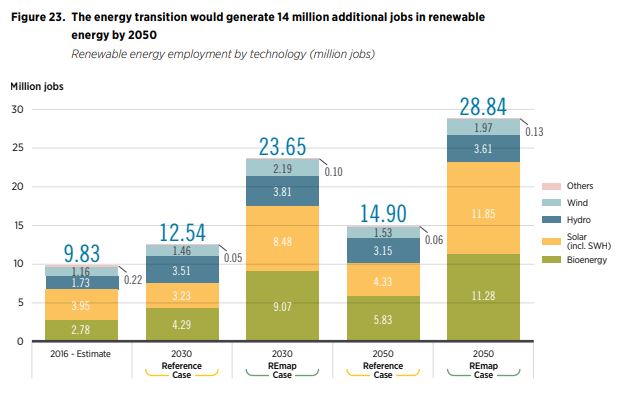 IRENA also reminds to keep in mind the just transition and human welfare:

However, energy related jobs are not likely to be created and lost in the same areas and at the same time. Although the transition offers clear net employment gains, there is also a need for adjustments as the transition unfolds. This is particularly the case in countries and regions where many livelihoods depend on the fossil fuel sector. A pro-active just transition policy helps minimise socio-economic disruptions and promotes economic structures that allow countries to maximise benefits arising from the transition.The REmap energy transition significantly improves the global socioeconomic footprint over the reference scenario, providing in year 2050 global increases of 15% in welfare, 1% in GDP and 0.1% in employment. The socioeconomic benefits from the transition (welfare) go well beyond GDP improvements, and are strongly dominated by social and environmental benefits (reduction of local air pollution and reduced climate impacts due to reduced GHG emissions).

Finally, according to the New Climate Economy’s report “Unlocking the Inclusive Growth Story of the 21st Century: Accelerating Climate Action in Urgent Times” (profiled earlier on The Climate Economy in this post):

“…taking ambitious climate action could generate over 65 million new low-carbon jobs in 2030, equivalent to today’s entire workforces of the UK and Egypt combined, as well as avoid over 700,000 premature deaths from air pollution compared with business-as-usual…more than offsetting employment reductions in some declining sectors to lead to a net employment gain of 37 million jobs globally by 2030. Engaging affected workers and communities in social dialogue with industry and the government will be essential to ensure a just transition for individual workers and for regions where fossil fuel jobs are concentrated.

These efforts would be in line with keeping the increase in global temperatures well below 2 degrees Celsius, which may avoid the more disastrous effects and tipping points of climate change.

Human progress is not going to be hurt by clean energy and climate action; emissions from burning fossil fuels will decrease, and jobs, human health and welfare will increase. It’s a win-win-win for climate-economy-humanity.